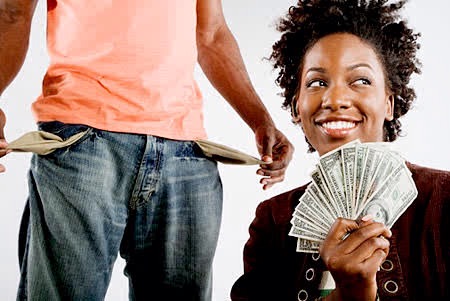 You say she has to “have her own” but are YOU out of your parent’s house? That includes your grandparents’, cousins’, aunt’s, or uncle’s house too.

Do you have a career or even have a job? You require independence in a woman; yet, you do not possess it yourself.

Can you fill her refrigerator with food? You require your woman to cook for you every day; but do you help her out with groceries?

You say you want your woman to have a car; but do YOU have one?

You say you want a woman with no kids; but…. you have two or three kids yourself??

Or maybe you are the type willing to step up & be a father to her children; yet your own children are walking around father-less.

You want your woman to have a “BANGING” body, and she needs to “compliment you”; but you are 50 pounds overweight.

You said you want a church going woman; but that is confusing because you only attend church on Palm and Easter Sunday.

You want a woman “who knows how to treat a man”; a woman who respects you, admires you, and “lets a man be a man”.

But are YOU respectable…… admirable? Are you a MAN?

You love to point out scriptures like Genesis 2:18 which says woman was made to be man’s helper, and Ephesians 5:22 where it says a WIFE submits to her HUSBAND; yes sir, I’ve read those scriptures. But… I also read in Genesis 2:24 that a man is to LEAVE (keyword) his mother and father and become one with his wife; and I read in 1 Timothy 5:8 that a man who does not provide for his own house has denied the faith & is worse than a non-believer.

There is nothing wrong with wanting an independent, church going woman who cooks & “knows how to treat her man”.. but understand this, that woman wants a certain type of man.

I recently had a conversation with someone from my past; he expressed that he wanted to marry me. I had to be completely honest with him about why he is not the man for me. Besides the fact that he cannot provide for or lead a family he is not TRYING to make his situation better. And that is evidence that he lacks what is most important to me…. striving to become the man that Gods calls him to be. The man for me is in God’s word, a reader and a doer; he understands that he is called to be a leader, a protector, a provider. I had to be quite blunt with him; he is not even ready for me. Not just because he does not have a steady job; not just because he stays with family… but because he is OKAY with it. And because he is okay with staying home with the kids while I work. Excuse me?? If I wanted a wife, I would be with a woman! He seems to desire husband-hood (if that is a word) more than he desires manhood. I told him as nicely and sincerely as I know how that he needs to focus on becoming a man before trying to become a husband.

I am not man bashing nor am I talking down on anyone; in fact, the only man who would be offended by this post is the man described above, who demands so much in a woman but lack those qualities himself. As a man, why would you NOT want to lead, protect, and provide for your woman? Nowadays, women are the ones bringing home the bacon and cooking it too.This is not God’s design for family. Many argue that this is a new day; It may be a “new day” but God’s Word is the same today and forever. And it calls for man (not woman) to be the HEAD of his family.

That is all for now